The actress known for her role as Princess Leia is severely manic depressive (now usually called bipolar disorder). Here’s a glimpse of just how manic she could get, from a Psychology Today piece:

Some years ago, the writer and actress suffered what she calls a “psychotic break.” At the time, she was experiencing a deep depression—just getting out of bed to pick up her then eight-year-old daughter Billie was a major feat. She was also improperly medicated. All of which landed her in the hospital. While there she was riveted to CNN, convinced that she was both the serial killer Andrew Cunanan as well as the police who were seeking him. “I was concerned that when he was caught, I would be caught,” she recalls.

Her brother, filmmaker Todd Fisher, feared that he was going to lose her. “The doctors said she might not come back.” Awake for six days and six nights, she recalls hallucinating that a beautiful golden light was coming out of her head. Yet the confusing thing about her mania, says Todd, is her ability to remain articulate, clever and funny. Todd says she launched into Don Rickles-like diatribes, “ripping everyone who came into her room.”

“For nearly two decades, Big Pharma commercials have falsely told Americans that mental illness is associated with a chemical brain imbalance, but the truth is that depression and suicidality are associated with poverty, unemployment, and mass incarceration. And the truth is that American society has now become so especially oppressive for young people that an embarrassingly large number of American teenagers and young adults are depressed and suicidal.”

“Artist Georgia O’Keeffe suffered significant periods of depression during her life, according to biographers Roxana Robinson (Georgia O’Keeffe: A Life) and Hunter Drohojowska-Philp (Full Bloom: The Art and Life of Georgia O’Keeffe). At age 46, O’Keeffe was admitted to Doctors Hospital in New York City following symptoms of anxiety and depression that included weeping spells and not eating or sleeping. At the time, her breakdown was attributed to the stress of not completing a Radio City Music Hall mural, but her biographers now conclude that O’Keeffe was caught between fear of public failure and rebellion against her control-freak husband, the renown photographer Alfred Stieglitz, 23 years older than O’Keeffe, who had an affair with a woman almost two decades younger than O’Keeffe.”

From A Portrait of the Artist: The Life and Art of Jackson Pollock:

Nor have fans of Pollock ever had any illusions about the artist’s state of mental instability. An abuser of alcohol all his adult life, he suffered a nervous breakdown in 1938 while still living and working in lower Manhattan and was briefly hospitalised for depression. Thereafter, however, there were signs that Pollock’s personal and professional life might achieve some equilibrium. In 1943, Guggenheim gave him his first solo show at her Art of this Century gallery. In 1944, he married Krasner, who was already his long-time lover, and they bought the Springs house together. He was also undergoing intensive psychotherapy at the time – a process that many believe influenced the work of his most productive period in the late 1940s and early 1950s.

all of the otherwise vital forces that make us human, leaving instead a bleak, despairing, desperate, and deadened state. . . Life is bloodless, pulseless, and yet present enough to allow a suffocating horror and pain. All bearings are lost; all things are dark and drained of feeling. The slippage into futility is first gradual, then utter. Thought, which is as pervasively affected by depression as mood, is morbid, confused, and stuporous. It is also vacillating, ruminative, indecisive, and self-castigating. The body is bone-weary; there is no will; nothing is that is not an effort, and nothing at all seems worth it. Sleep is fragmented, elusive, or all-consuming. Like an unstable, gas, an irritable exhaustion seeps into every crevice of thought and action.”
― Kay Redfield Jamison

Interesting piece here by Richard A. Friedman, MD, that appeared in the New York Times in January. Uncharacteristically for a psychiatrist, Friedman looks at which kinds of depression respond more to medication v. which ones respond to talk therapy. The article is titled “To Treat Depression, Drugs or Therapy?”

Dr. Helen Mayberg, a professor of psychiatry at Emory University, recently published a study in JAMA Psychiatry that identified a potential biomarker in the brain that could predict whether a depressed patient would respond better to psychotherapy or antidepressant medication.

Using PET scans, she randomized a group of depressed patients to either 12 weeks of treatment with the S.S.R.I. antidepressant Lexapro or to cognitive behavior therapy, which teaches patients to correct their negative and distorted thinking.

Noted in both the Washington Post and the New York Times this morning, research just out (Monday) suggests that walking in nature helps reduce rumination (brooding, obsessing over unsolvable problems). The mechanism is unclear.

The researcher, Gregory Bratman at Stanford, measured bloodflow to a part of the brain associated with rumination, the subgenual prefrontal cortex. (In research on meditation, the prefrontal cortex has also been implicated in self-referential thought, and that self-referential thought is associated with unhappiness.) Post-walk, participants showed small but significant reduction of bloodflow to that part of the brain.

Still, if you’re depressed, take a walk! Or just go outside and take in some trees. It really does make a difference.

“I had no doubt that Tiny thought he got depressed, but that was probably because he had nothing to compare it to. Still, what could I say? that I didn’t just feel depressed – instead, it was like the depression was the core of me, of every part of me, from my mind to my bones? That if he got blue, I got black? That I hated those pills so much because I knew how much I relied on them to live?

No, I couldn’t say any of this because when it all comes down to it, nobody wants to hear it. No matter how much they like you or love you, they don’t want to hear it.”
― John Green, Will Grayson, Will Grayson 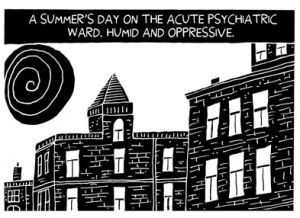 Don’t let this one fool you. Though it’s a fairly straightforward web comic, done in a simple style, it packs a punch worthy of the topic. Powerful stuff.

“Depression is a painfully slow, crashing death. Mania is the other extreme, a wild roller coaster run off its tracks, an eight ball of coke cut with speed. It’s fun and it’s frightening as hell. Some patients – bipolar type I – experience both extremes; other – bipolar type II – suffer depression almost exclusively. But the “mixed state,” the mercurial churning of both high and low, is the most dangerous, the most deadly. Suicide too often results from the impulsive nature and physical speed of psychotic mania coupled with depression’s paranoid self-loathing.”
― David Lovelace, Scattershot: My Bipolar Family